In this post, we will use the “Cost Tracking” sheet as an example of where we need to use Zapier to loop through a list of items and carry out an action for each item.

In a typical marketing team, a sheet like the “Cost Tracking” sheet will be updated at the start of every month to map all the ad campaign costs from their various marketing channels from the previous month to the corresponding program that tracked the leads generated from this campaign.

Therefore, the objective of the Zapier automation workflow is to update each of the programs listed in this sheet with their respective costs so that the cost of acquiring a lead can be calculated.

Now that we have the programs and costs collected nicely in Google Sheets the first task that needs to be done is importing this information into Zapier.

As explained in the Zapier Google Sheets Quick-Start Guide (DM me for the link) the Google Sheets app in Zapier is limited to pulling in a maximum of 20 rows of data in a single action so if you want to import more rows than this then you need to get creative!

In this example, we will follow the steps outlined in the Zapier Google Sheets Lookup Value post (DM me for the link) by

Taking a quick peek at the “Cost Submissions” tab, we can see that there is a column for Period Costs and another for Marketo Programs where both columns contain a string variable. These string variables are created by the “concatenate.js” Google Script which joins every value in the “Program” and “Cost” columns of the “Costs July 2020” tab together using the * character.

This Google Script can be assigned to a button (see the Triggering a Google Script using a Button post (DM me for the link)) so that anytime the button is clicked these strings will be created and then stored in a new row in the “Cost Submissions” tab along with a timestamp and the beginning of a log which will be populated by the zap with the status of each cost update. 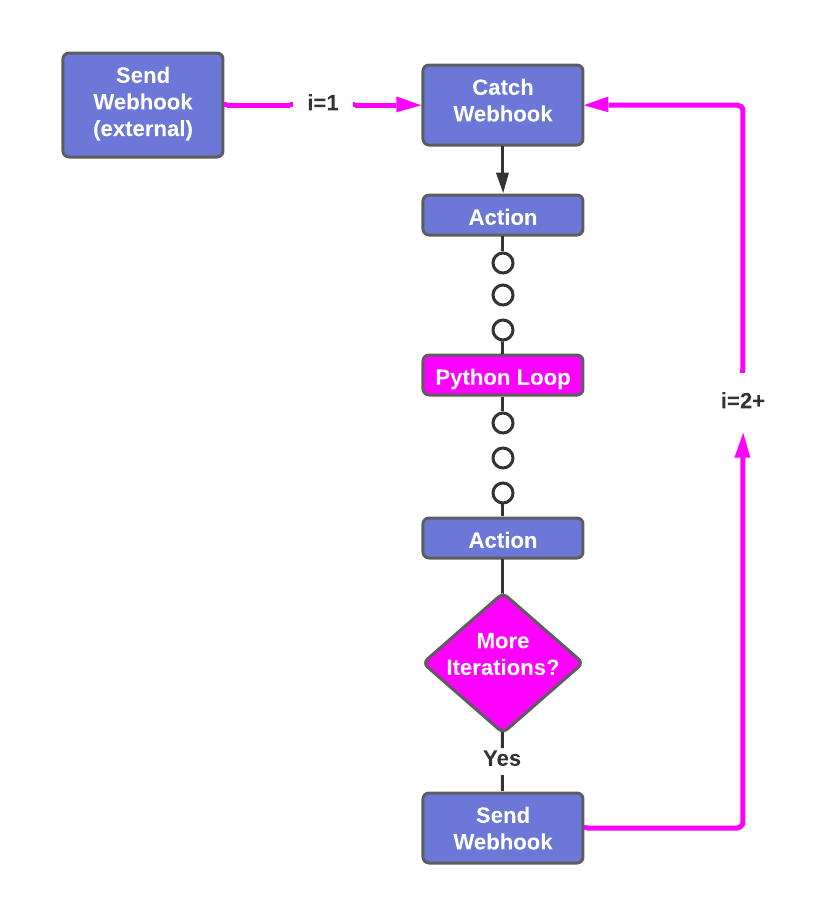 Achieving nested looping in Zapier is done by book-ending the zap with the “Catch Hook” trigger event at the start and the “POST” webhook action event at the end to form an outer loop, which contains the nested Python loop. When you come to Step 3 below, you might be wondering why there is a need to have nested looping in this zap at all. Why could we not just iterate through all the programs at once in the Python loop and remove the webhooks forming the outer loop?

Again the reason for this is that Zapier has a 10-sec timeout on all its tasks so if you tried to update all the costs at once then the task might timeout and the zap will fail. Therefore for improved scalability as your number of digital advertising campaigns increases, it is better to break the programs into smaller groups and then update the programs within each group in successive iterations of the outer loop.

From my own experimentation, I found that updating 20 programs at a time in Step 3 led to an execution time well under the 10-sec timeout. 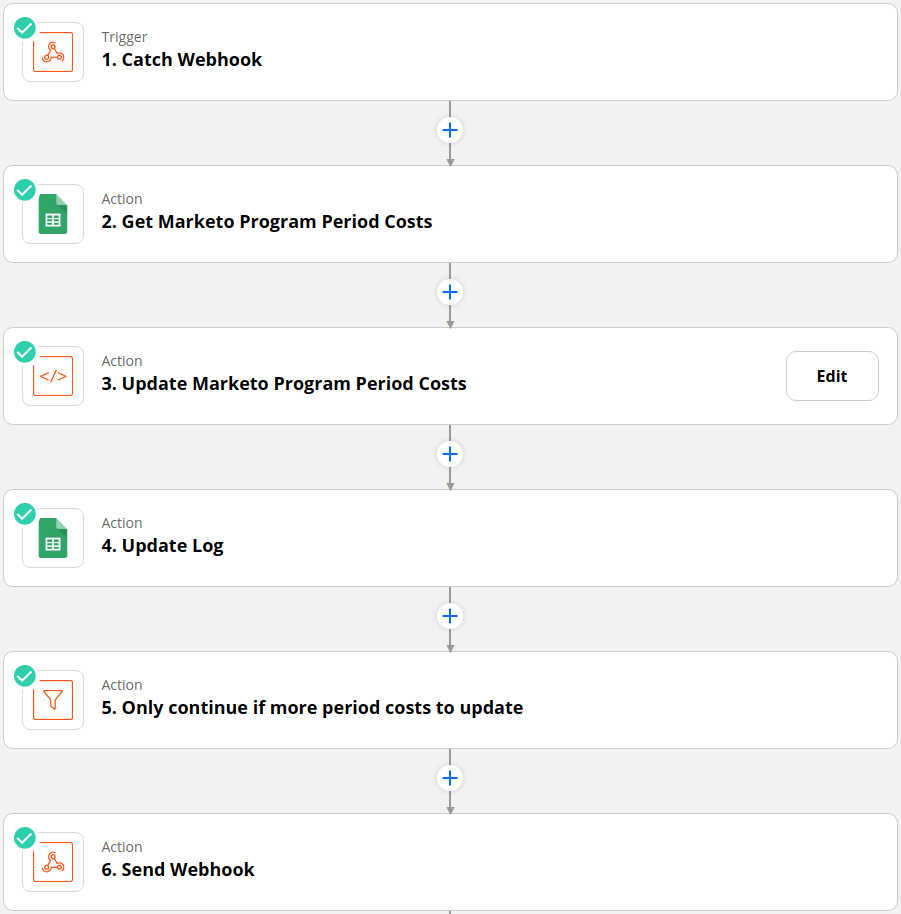 Zapier trigger to catch the webhook sent from the Google script 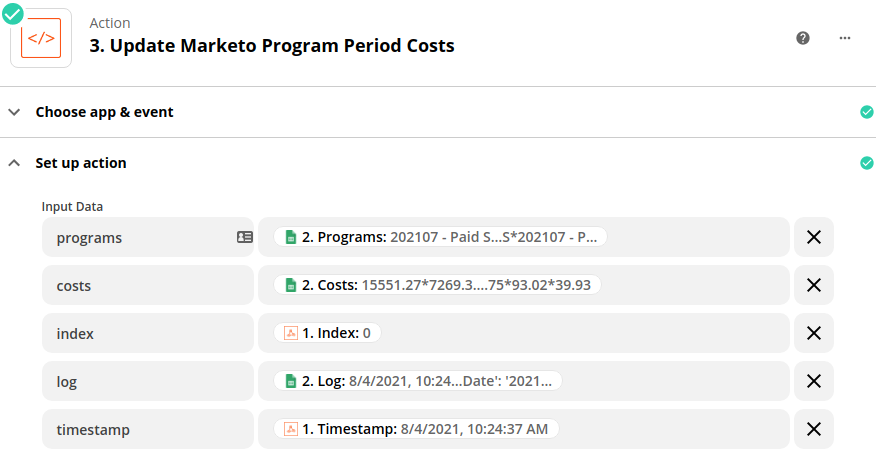 Inputs used in the Python code

N.B. If it is your first time using the API or you need a quick refresher then check out the Quick-Start Guide to the API to see how to make your first requests in Postman before transitioning to making requests in code or in the Zapier automation tool. 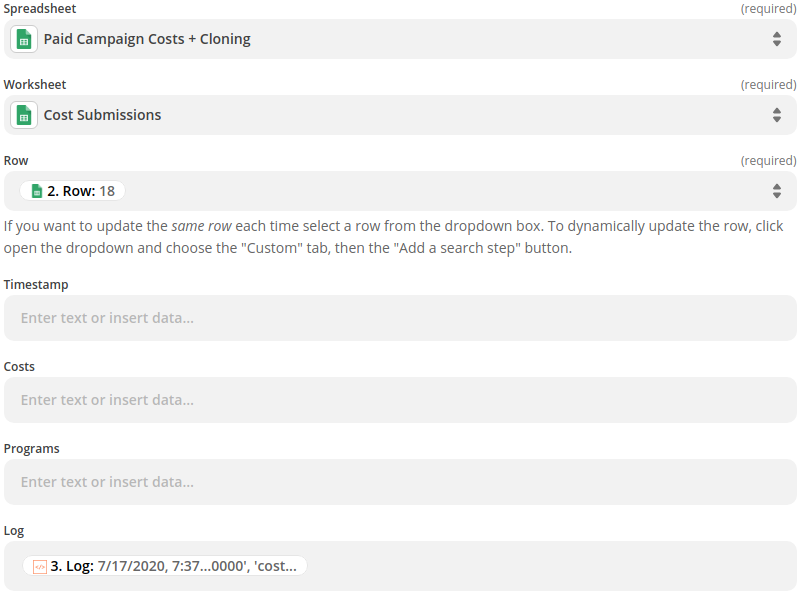 Update the log with the responses from the update costs requests

Step 5. Only continue if more costs to update

Never fear! The Bulk Updating Costs Via API post will guide you through how to use the API to take your historical ad campaign costs and update the costs of the associated programs in bulk.

P.S. Check out the video below to see how everything is stitched together, how the zap is setup, and what the output log of successful cost updates looks like.

P.P.S.There is no commentary on this video so no there is not an issue with the sound haha Go easy this was my very first YouTube video! I may redo it at some point in the future with commentary so if you want to see that leave a comment below 🙂 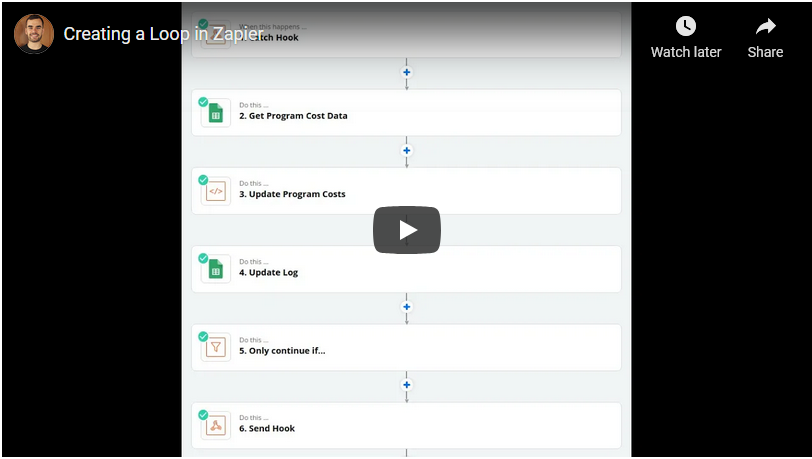