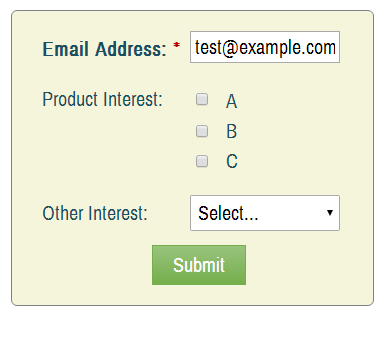 Another one to file under “More tricky than it seems.” As Marketo users MS and JI note in these posts, when a lead doesn't click any of the available options for a form field, the form sends an empty string value to the server, and such a response is considered a no-op — that is, the existing value on the lead will be preserved.

(By the way, when it comes to checkboxes and radio buttons, standard HTML forms do not post anything at all — not even the field name, let alone an empty string value — in such cases. So we're starting off on a proprietary foot here. As I've mentioned in other posts, though Forms 2.0 uses standard HTML inputs, there's much more going on under the hood.)

If submitted as-is, neither Product Interest nor Other Interest will be updated in Marketo.