A global issue at Gmail resulted in emails sent to valid Gmail email addresses being incorrectly hard bounced as Invalid Email Addresses by Gmail servers.  Per standard bounce handling logic, Marketo Engage automatically set these leads’ “Email Invalid” field to be true along with “Email Invalid Cause” with the error message from Google “550-5.1.1 The email account that you tried to reach does not exist.”

You will not be able to send emails to these leads via Marketo Engage until the “Email Invalid” field is set back to false as documented here.

How to correct the affected leads?

The leads would have an “Email Bounced” activity as shown in the screenshot below with SubCategory=2003 and Category=2. 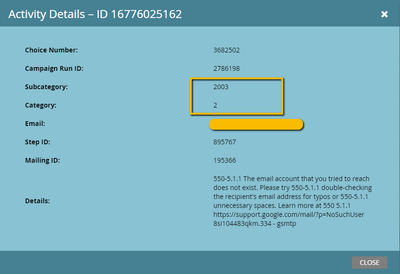 Since we have the affected timeframe and the Category/Subcategory values, we can construct a Smart Campaign similar to the screenshot below in order to identify and correct the affected leads.

Please be aware of the following important notes: 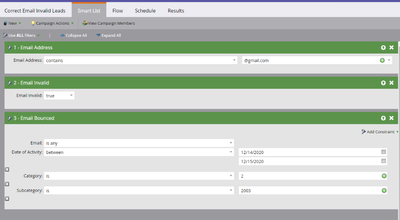 In addition to the above correction logic, you might have customized trigger campaigns that add leads to an Exclusion List and other logic that needs to be reverted.  Please add the necessary flows to correct those items if you have any custom logic.