Why am I seeing PostLC Touchpoints in my CRM Reports?

If you’re reporting at the top of the funnel (reports using Bizible Touchpoints) you might notice a value of “PostLC” in the Touchpoint Position field/column. If you’re curious what this is, this post is for you!

First, let’s make sure we’re aligned on the Touchpoint Position field. Put simply, this Bizible field tells you where in the journey the Touchpoint happened. With a Bizible Touchpoint report the values you can potentially see are:

So, back to the point, what is PostLC? PostLC is a Touchpoint Position value that Bizible populates when it’s a touchpoint that has happened, but it happened after the point of Lead Creation (LC). Essentially this means that any touchpoints marked PostLC will not be eligible for attribution credit in the attribution models that apply to the top of the funnel (First Touch, Lead Creation, and U-Shaped) since these models only go up to the point of Lead Creation. The screenshot lower shows this.

The idea behind PostLC is to show you as much interaction as possible. Think of the stock report Bizible 101 | Leads by ID, this report is designed to show you the story of each Lead so by having PostLC Touchpoints, you can see more of their journey past the point of Lead Creation (LC).

Here is an example from a Bizible 101 | Leads by ID Report:

*Note this is a screenshot from Bizible's old SFDC instance (years ago) so it's a bit different than what customers would see. You shouldn't see a Touchpoint Position of just "PostLC" , instead you should see "PostLC, Form". This is because Bizible only creates touchpoints for standalone page views if it was an anonymous first touch or the very last thing before a milestone stage change (like OC).

That said, limits on PostLC touchpoints are in your control! Most Bizible clients have the limit set to 10 PostLCs on both the Lead and Contact, but you can increase or decrease this as you see fit in the Bizible account.

In Bizible under the CRM section, in either the Lead or Contact subsections, you can alter these limits as needed. Simply click the lock icon next to the input box for “Number of Post LC on Lead/Contact Touchpoints” and enter your new number. Don’t forget to click Save! 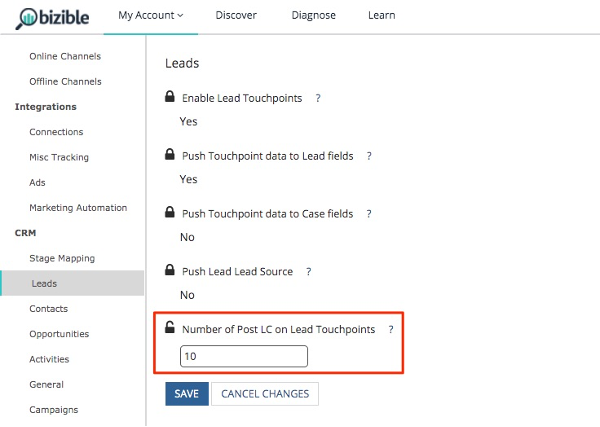 One final note on the behavior of PostLC touchpoints! If your max limit is set at 10, that means there can only be up to 10 PostLC’s at a time. So, if there did happen to be 11 touchpoints that happened after the point of PostLC, Bizible would swap out the earliest PostLC in order to have room for the most recent values.

Hello Kate! We have enabled PostLC Touchpoints and they're coming in but only ones that have a conversion. So we're seeing "PostLC, Form" positions on all of them. In your screenshot you show that just a PostLC can occur if someone visits from a Google search or an ad but doesn't fill out a form.  It seems very unlikely that there would be no PostLC only touchpoint positions in our data. Do you know if there is something else that has to be enabled to turn this on? Or is this a limitation of the PostLC feature?

Hey there! Thanks for posting this -- I should have mentioned in my post that the screenshot is slightly different than what you'd expect to see in your CRM data. This is because it's a screenshot from Bizible's old SFDC instance where the configuration was a bit different.

What you're seeing is actually expected because Bizible's designed behavior is to ONLY push a touchpoint for a page view/web visit if it was an anonymous first touch or the very last thing before a milestone stage change (like OC or Closed for example).  So unless the page view meets that criteria, you wouldn't see a standalone PostLC for it.

Bizible's data was different though just being "Bizible's Bizible". I appreciate you bringing this to my attention though -- I'll try to get a different screenshot to make the post less confusing! I hope this helps.